When using Auto Deploy for a stateless ESXi server (ie. PXE boot) over a NIC that is connected to a trunked switch port (in my case 0-4094), it will default to using the native VLAN, and thus the DHCP server on your native VLAN (in most cases VLAN 1).

This is almost certainly undesirable for your environment; in a physical environment you have the ability to configure the BIOS (on particular servers) to PXE boot on a specified VLAN, unfortunately that isn’t an option using a nested ESXi host as the BIOS doesn’t have this ability.

Each of my nested hosts is setup like this: 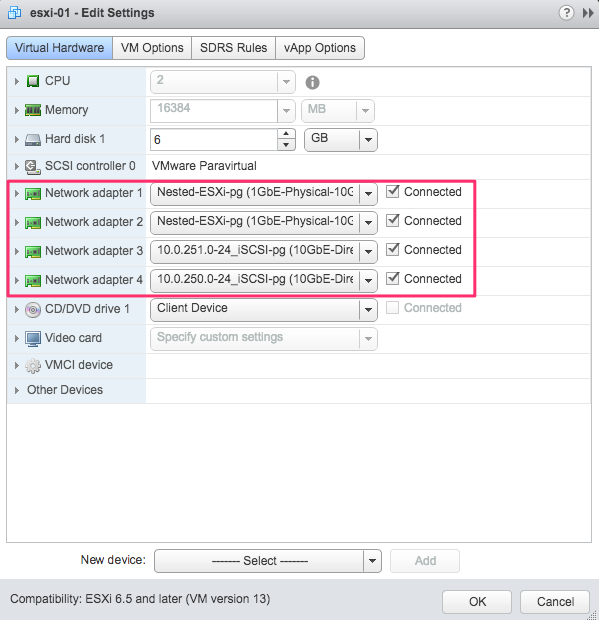 You can see that vmnic2 and vmnic3 are both direct connected to my IP storage over 10GbE; vmnic/vmnic1 are the adapters that we would want to attempt to PXE boot from for a nested stateless host.

As mentioned above, if we tried to PXE boot off either vmnic0 or vmnic1 at the moment you would need to have your DHCP server on your native VLAN configured for PXE and be able to route traffic to the VLAN that your tftp and vCenter servers are running on, not desirable.

What I did to get around this was add another NIC to my nested host VMs (only for the stateless hosts, stateful ones don’t require it). This 5th NIC would reside on the same VLAN that I have configured for my management vmkernel adapters (VLAN 50, 192.168.5.0/24 for reference). Notice the extra NIC (vmnic4) below: 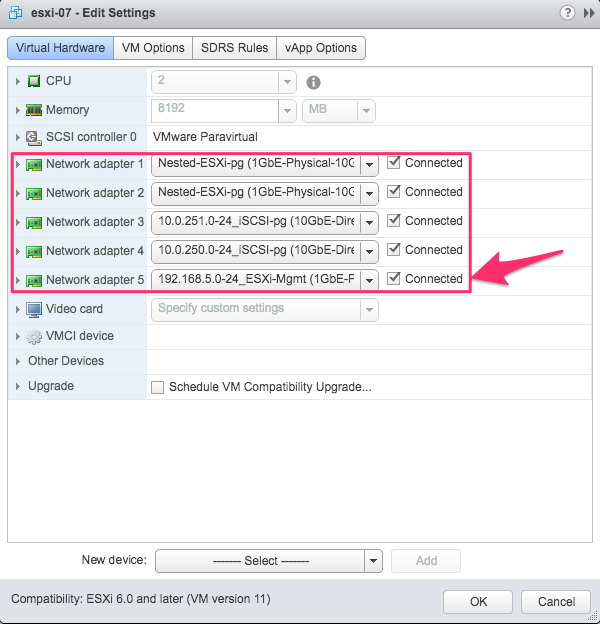 Next, we need to configure the BIOS to boot from our newly created NIC as its first option (NOTE: when using UEFI, you can explicitly disable all other boot options, this isn’t possible using BIOS, hence the ordering change).

Once we have configured the boot priority, it’s time to power on the VM that you intend to use as your stateless ESXi server.

Where has the host gone?!?

Your host has almost certainly just lost connectivity with vCenter, this would have happened after applying the host profile with customisations. I spent a good while scratching my head as to why this happened, here’s what I observed:

What has happened is that the host has registered the vmkernel adapter on the same port group as we PXE booted on, but because it has a different MAC address to the NIC that we PXE booted on, it will get its own lease from the DHCP server. vCenter registered this host to communicate on the IP/hostname that it first presented with after PXE booting, but now the management vmkernel adapter is listening on a different address. Quite the dilemma…

The way around this is to do the following: 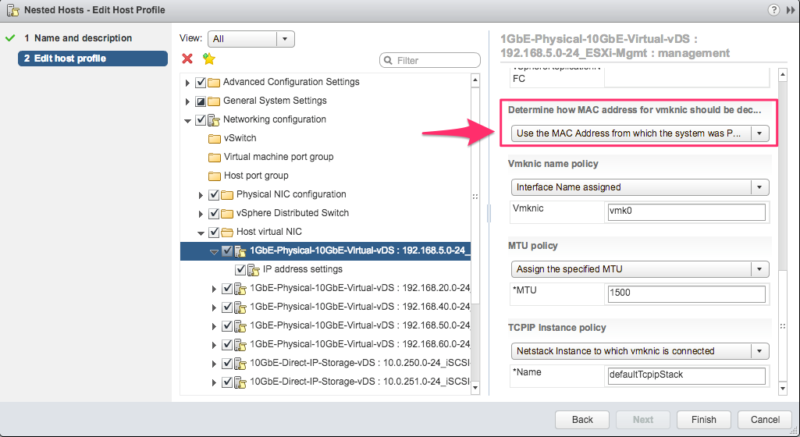 This will ensure that we don’t get a fresh DHCP lease for our management vmkernel adapter due to a differing MAC address to the NIC that the host was PXE booted from. We won’t lose connectivity with vCenter after our stateless host is booted and has the host profile applied.

After ensuring that this is set in the Host Profile, you should be right to boot the nested stateless host without any issues.

For reference, this was tested in my lab against vCenter Server Appliance 6.5.0d and ESXi 6.5.0d.